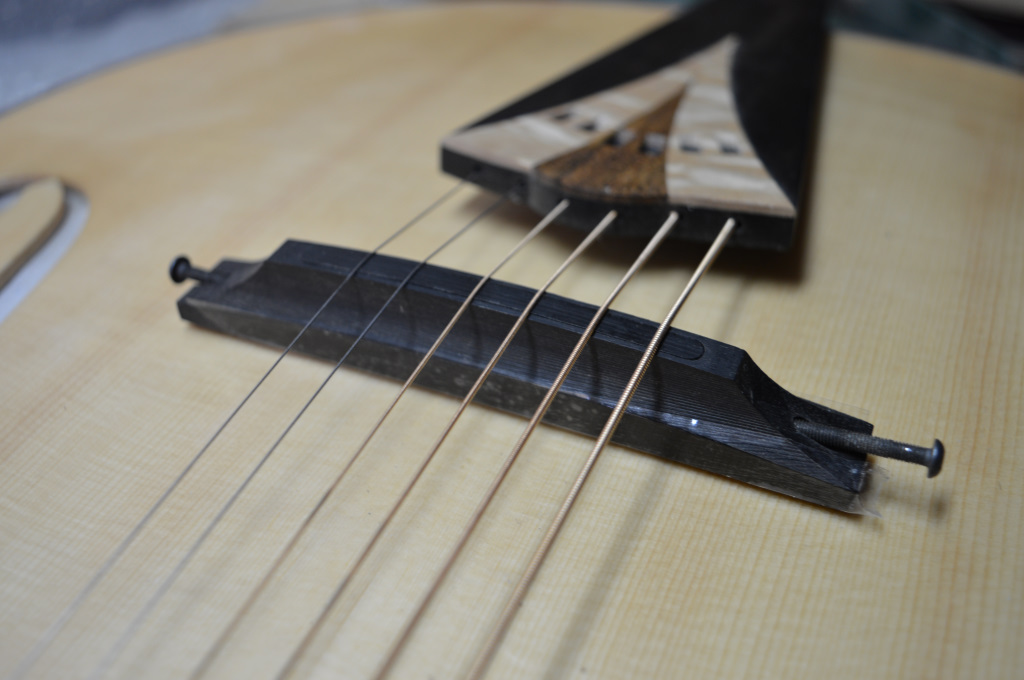 I am working on a bridge for one of my latest guitars. Inspired by the D’Aquisto “stick” design, I am trying to correct the two or three things that most players don’t like about it. The idea is to use curved instead of straight wedges. They are kept in full contact through all the height settings, but they also allow for independent adjustment at both sides. It is also smaller than most conventional bridges; in this case, it has a height below 19 mm (conventional bridges using foot and saddle plus thumbscrews are prone to sagging when they are so low). The height adjustment doesn’t use protruding sticks; instead, it is done by using an Allen key which is inserted into two discreet holes at both sides (the video below shows screws with a head, but only because I didn’t have grub screws available at the time).

I thought that the best way to explain this bridge in a video is to mount it from its pieces so that you can see how they are arranged inside. Notice again that, having used conventional screws instead of grub screws, the height adjustment is limited by the screw heads. Also, I didn’t install the springs; they are necessary for recovery when the saddle is lowered.

The photo above shows the bridge on the guitar, this time with the springs installed. There are a few things that are not finished yet: the screws mentioned above, the flat base that doesn’t follow the curvature of the guitar top, the top of the saddle (which right now is flat, being good only for checking the bridge up-and-down functionality). The bottom cover is not even glued but, anyway, I checked that it works!

I still have some work to do on this prototype, but I feel that the idea is sound and I won’t find unsurmountable problems. I also have some springless designs, that can be made very narrow and even lighter. Stay tuned, I’ll show you more soon!