A New Design for a Side Bender 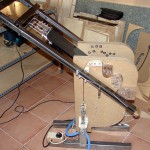 This side bender is based on three key ideas:

For small guitarmakers, bending the sides of a guitar, regardless the method, is a job that can be anything between easy as pie or become a nightmare. There are two main systems: bending irons (electric, gas or even charcoal heated) and mechanical presses. Among the latter, the Fox Bender is an ingenious, proven device designed by Charles Fox and found all around the world especially in small shops. It worked well for me doing the waist bends, but after some bad experiences with cutaways in curly maple I decided to use it exclusively for the waist. Part of the problems were mine, I guess, because I made my machine without plans and using my own screws, springs, etc. Whatever the reason, I went back to my humble bending iron; I could get decent results with it, but they took much longer than I thought reasonable.

I established a set of requisites for the new machine:

I went through innumerable designs, some quite complex, discarding them for different reasons.

This is how the last version looks:

It won’t be the last one; I have some improvements pending, but the working principles described here won’t change.

The requisites in the previous list were all met, some with more success than others:

The machine is based on three main principles: Convex Removable Forms, Tensioned Slats and Tangential Pull.

Guitar sides have both concave and convex surfaces. Seen from the outside, the waist, for example, is concave, but that changes if seen from the inside. We will divide the guitar contour into a series of curves, limited by those points where the curvature changes from concave to convex. We’ll build a set of convex blocks (from now on, “inner blocks”), one for each curve. These will be the forms on which the bending will take place, and they will be removable. The bending process will begin with one single inner block present, the one that corresponds to the lower bout. As each curved surface is bent, the next inner block must be fixed in position. Don’t worry if you don’t understand this now; it will be explained below.

Highly tensioned slats are the basis of the amazing bending machines that are shown on Bob Taylor’s “Factory Fridays” videos. I was mesmerized every time that I watched them, but trying to reproduce their principles always led me to machines not adequate for a small shop. Pushing a tensioned slat against a form is a difficult task, requiring a huge effort. Taylor was using a motorized design, but that seemed to be beyond my capabilities. And, worst of all, if I still managed to solve that, I foresaw similar but more difficult problems in the cutaway area. The Tangential Pull mechanism avoids all that.

The machine is not very easy to explain, so I have drawn some schematic diagrams. Suppose that the target surface is the one depicted here: 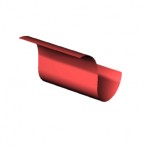 This figure represents a set of two inner blocks that can be used to bend it, following the “Convex Removable Forms” principle explained above. 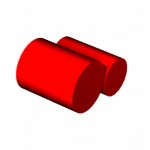 The following figure represents a machine ready to start bending that shape: 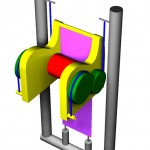 The chassis (the stationary part of the machine) is represented in yellow. There is a piece, which we will call the “bridge”, colored grey. It has two pneumatic cylinders below, pulling an end of the slat/heater/wood/slat layered arrangement (purple) that we will call the “sandwich”, the other end of which is attached to the chassis. This has the already known detachable blocks (in red), but this figure represents only one, as the other has not been placed yet (the figure above this one shows both). Notice that there are more blocks (green) located outside the chassis, the same shape and size as the inner blocks (not always, but basically true for this explanation — more on this later) and in line with them. All the blocks, inner and outer, are firmly attached to the chassis, and they can be placed and removed independently. Notice that, although the second inner block is absent, its corresponding outer blocks are present. Finally, there are two wire ropes (blue) that go from a point firm on the chassis to each leg of the bridge, along the perimeter of the outer blocks. You will notice that the bridge is in equilibrium between two tensions on its ends: that exerted by the sandwich and that exerted by the wire ropes. In what follows, for the sake of clarity, we will not draw the chassis. The points or pieces that must be attached to it are identified by a yellow surface, as shown in this figure: 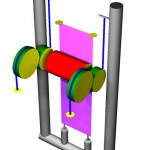 When the cylinders pull the slats, they become tensioned, the same as the blue wires. The tension on the slats is applied tangentially to the area being bent, due to the outer blocks having the same shape and size as the inner blocks. To operate the machine, we will sway the bridge manually, in this case pulling from its bottom side (arrow). The wire ropes will separate gradually from the small outer blocks, and the sandwich will press on the inner block just on the thin area being bent. The first part of the job will be finished when we arrive at the position depicted here: 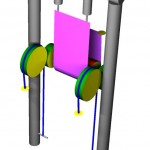 Notice that the effort to change the position has been light, as the mechanism has been constantly guiding the pull tangentially to the inner/outer blocks. Modifying the size of the outer blocks has a definite effect on that effort. We can take advantage of it to achieve a self-leveling (or almost) bridge, that can balance its own weight, freeing the operator from holding or clamping it between operations. Now look at the wire ropes. They have become unwound from the small outer blocks, having contact only with the other two. Arriving at this position has been smooth, keeping the tension on the sandwich constant. In fact, the initial position is still recoverable if we set the bridge back to where it was. Now it is time to place the second inner block (red) and remove the two outer blocks (green) that were in line with the first inner block: 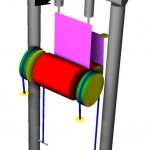 These operations do not require great effort, as neither the wire rope nor the sandwich (both under considerable tension) have contact with the blocks involved. If everything is well designed, these operations can be performed fast as well – a definite advantage when it comes to avoid problems like wood staining, burning or hardening that plague the slower designs. After swaying the bridge again, this time pulling from its top (arrow), we will arrive at the final position, represented here: 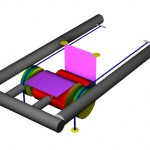 Again, the wire ropes have smoothly become unwound from the remaining outer blocks, keeping the tension on the sandwich constant. Summarizing, the geometry of the pull exerted by the sandwich is always longitudinal to the bridge and tangential to the area being bent (ideally, a line). This is the important difference that sets apart this design from all others based on tensioned slats: the operator will never have to work against the pull from the pneumatic cylinders. With this basic design, some problems can be anticipated. The most difficult to overcome for a small guitar maker is the apparent need of a very sturdy construction, usually associated to bulky metal parts. That problem can be reduced by changing the point where the wire rope is attached to the bridge, as shown here: 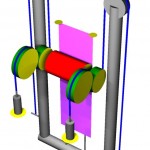 Another way of making the bridge lighter is to use it for bending all the curves except the lower bout. All these improvements over the basic design have been implemented in the machine shown above. Perhaps now you can recognize some of its parts..