This guitar has had two lives. The first began when I made it for a guitar show in Sarzana, Italy, in 2015, from where it got its name. It hadn’t a magnetic pickup  then, only the condenser mic AKG C411PP. After that, it stayed at home. Many tried it, but not having a magnetic pickup was an obvious limitation for selling it.

Recently I decided to install one. It was not a big problem, because  the guitar was prepared for it (for example, it had X instead of parallel bracing). I chose the prototype of a very special pickup that I made recently, the “Type 191”. Wound with very thick wire (VERY thick), it tries to emulate in a humbucker some of the characteristics of the CC pickups of almost a century ago. As the guitar didn’t have volume and tone controls, I decided to replace the tailpiece with another unit with the controls integrated.  Last but not least, I installed a bridge of a new design, based on D’Aquisto’s “wedge”. If you know it but you cannot find its peculiar “stick” in the photo, read the links on it: there are explanations for the interesting things in this guitar.

Of course, after three years the finish was a little dull, so I sanded and buffed the guitar again. It looks as beautiful as then, even more because the wood has gotten a darker deeper tone!

Carved curly maple back and sides: 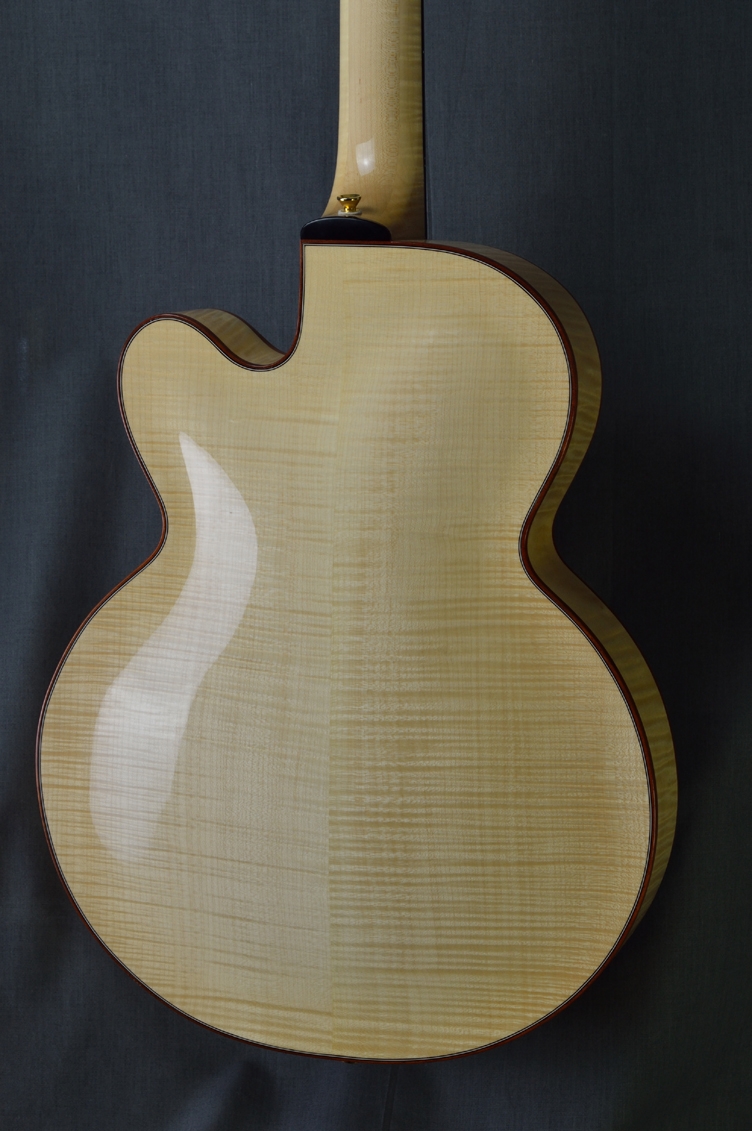 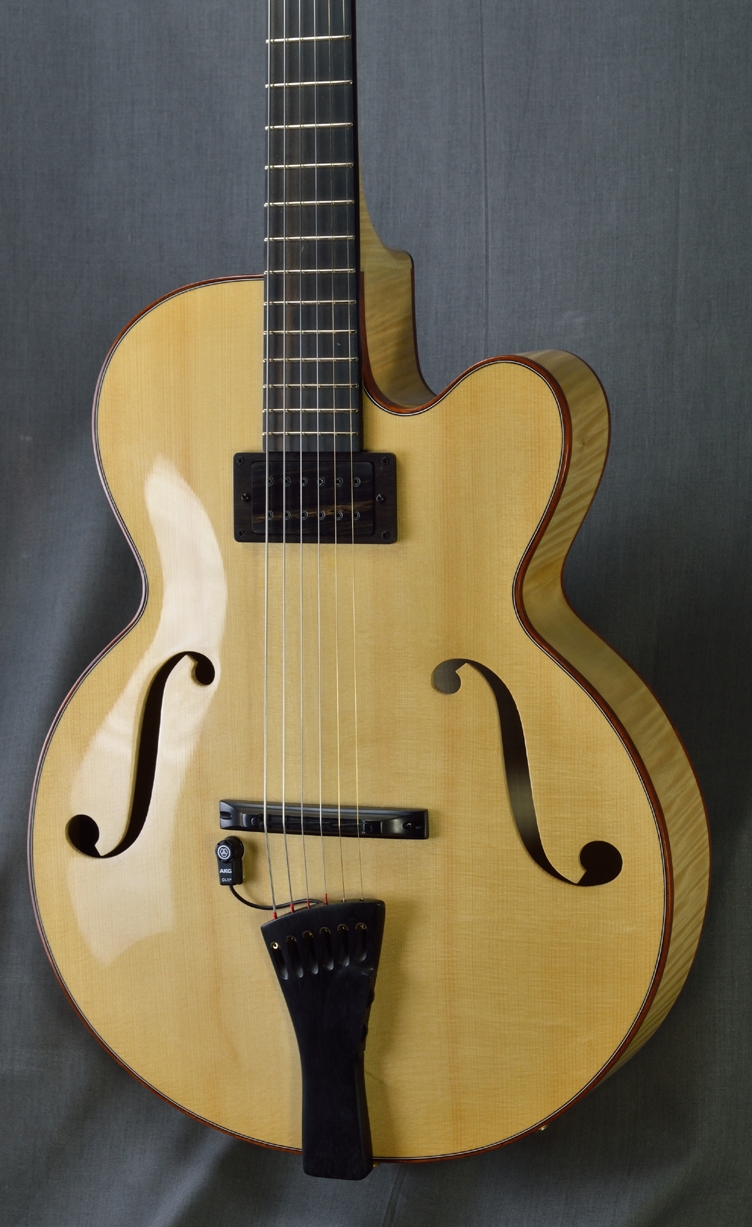 Jatoba bindings, with a plastic purfling: 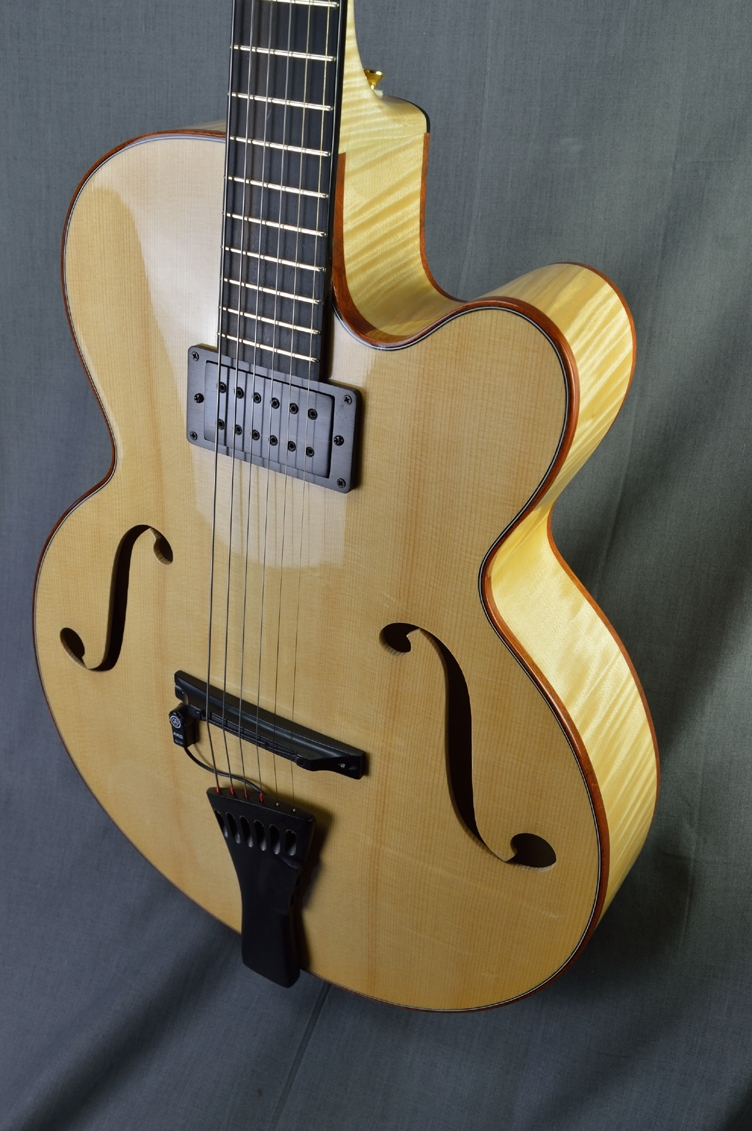 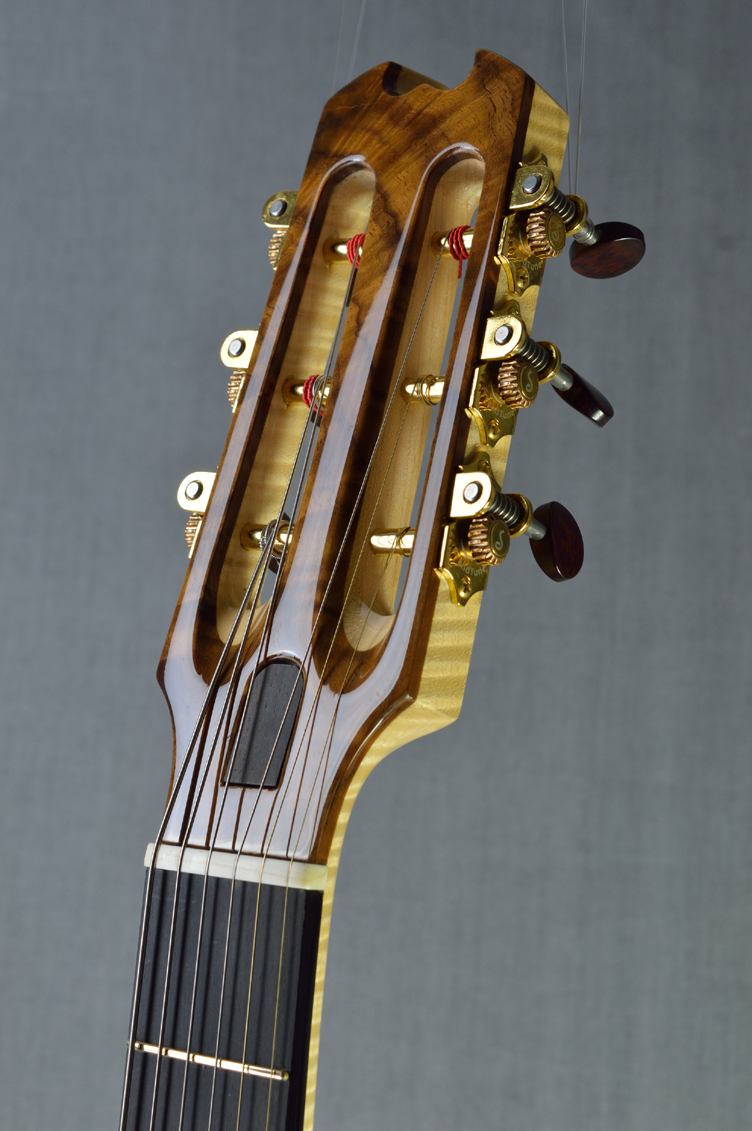 Ebony tailpiece with reliable string grounding. It has volume and tone controls for the magnetic pickup: 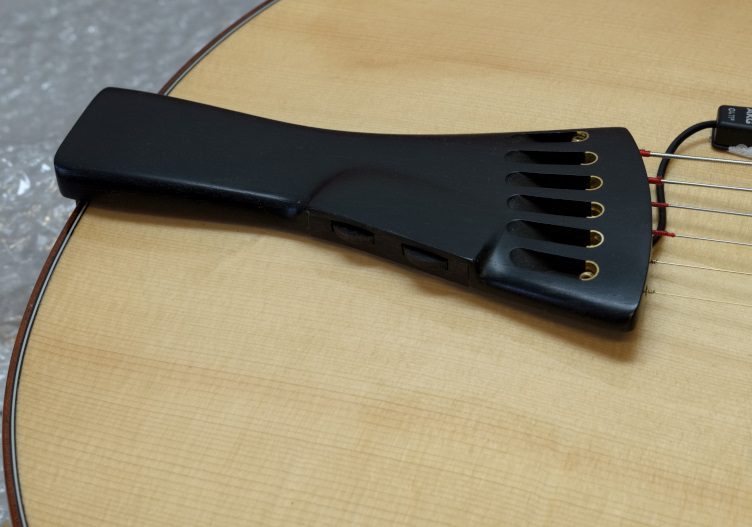 The bridge in this guitar is very special. If you want to know more, better read this. 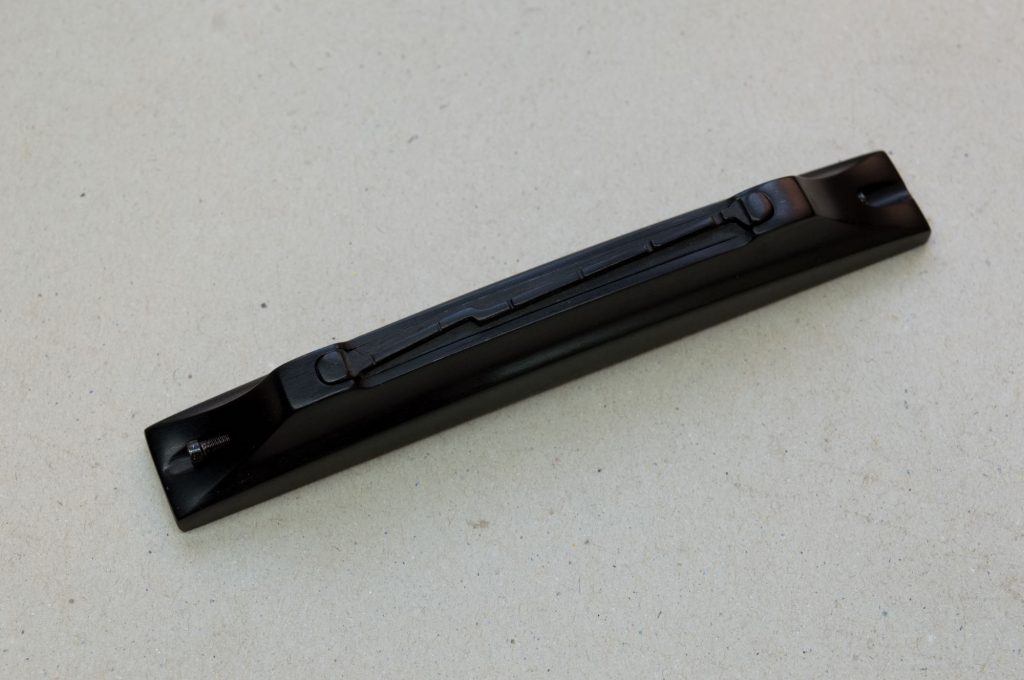 The AKG C411PP mic is connected through a a standard XLR connector. The magnetic pickup, through a standard 1/4" jack. This guitar is ideally suited for connecting it to a Henriksen The Bud or similar (are there similar amps anywhere...?), which has two independent channels and provides phantom power for the microphone. 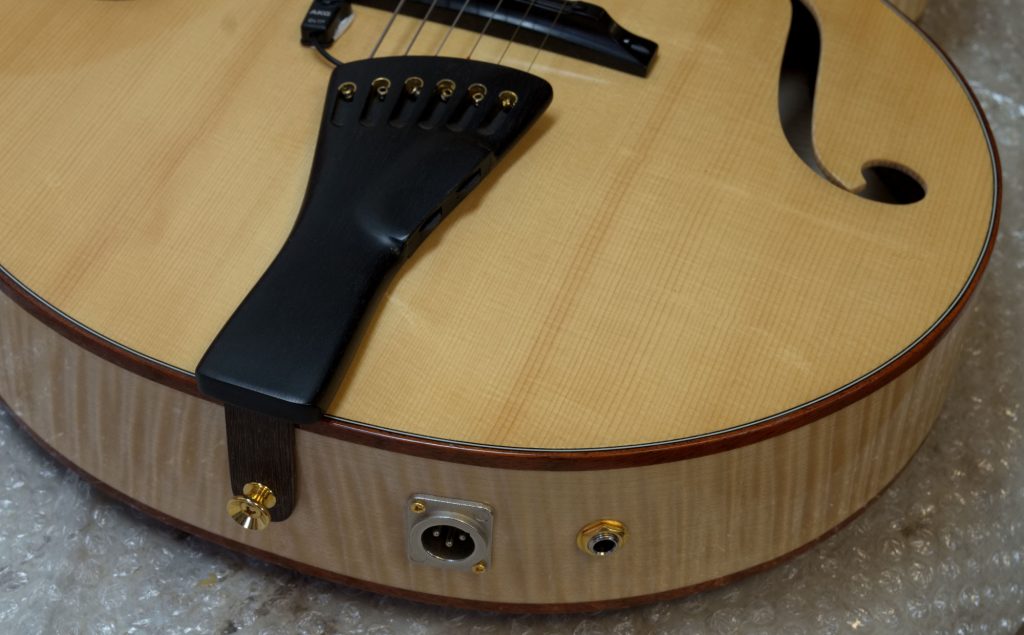 The pickup is very special. Wound with AWG38 wire, it has a DC resistance of 3.6 KOhm, but its inductance is around 5.2 H, which means that it is not a brittle-sounding pickup. A lesson for all those who pretend that the "impedance" of a pickup alone tells significant things about it. If you want to know more, look here. 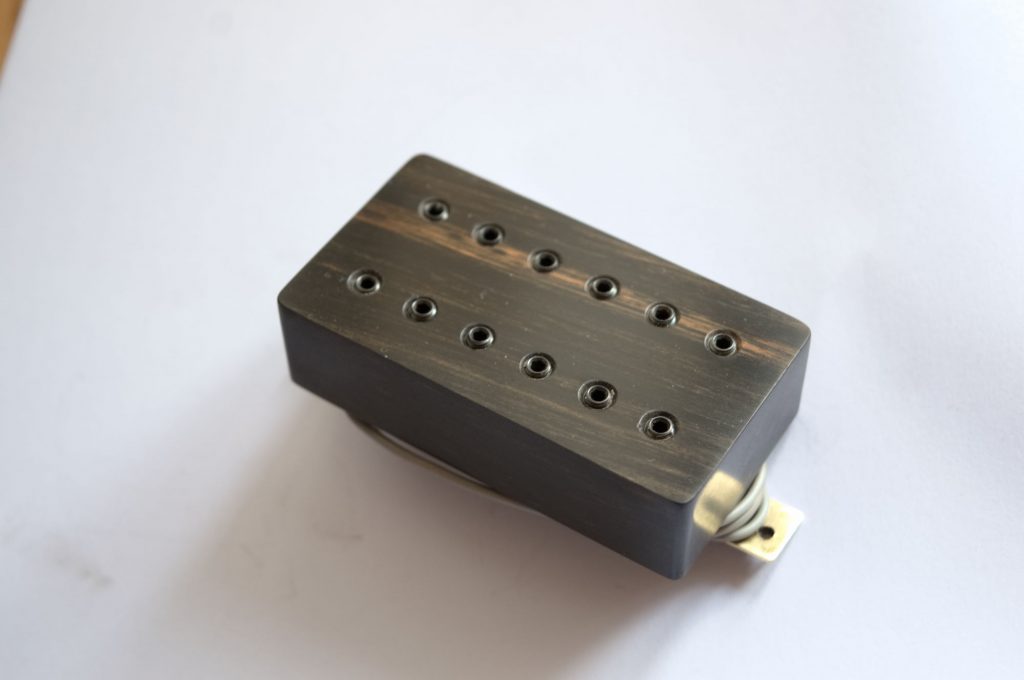 An interesting characteristic of the ebony pickup ring is that, being quite thin, it has been reinforced with a fiberglass core. You won't see anything of that internal piece from the outside, but its effect on the strength of the pickup ring is like night and day. Three pieces, two ebony and one fiberglass, put together to make a single pickup ring. It is a lot of work, but simpler means less reliable. This is the ring as seen from behind: 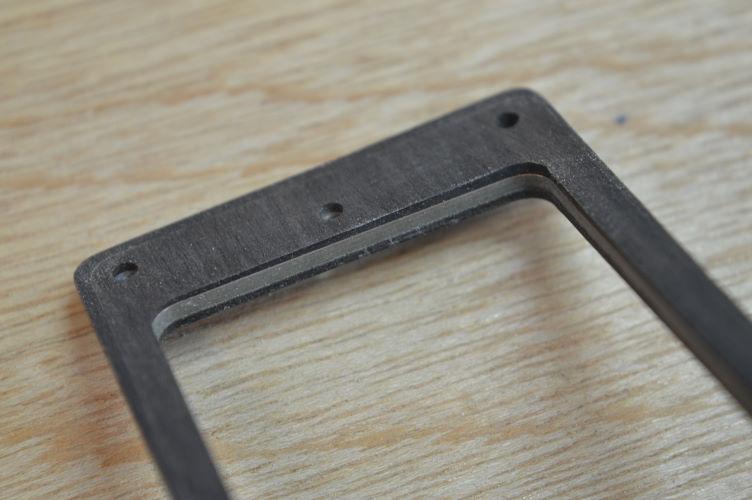