I have just finished two guitars, the “R” and “E” versions of my Siracusa model. I have worked hard on every single step, in a process that has taken months, changing my methods and making significant improvements for many parts in terms of mass, robustness, reliability, etc.

I’ll describe first the Siracusa 16R, the second guitar of this type that I made. Here it is:

Both guitars are finished in TruOil. It protects the wood from the wear caused by the player, but keeps the acoustic properties of the plates almost as if it was not there. It won’t make a tough protecting coat as lacquers do, but I have noticed an amazing improvement in tone after using it.

Take a look at the bridge: 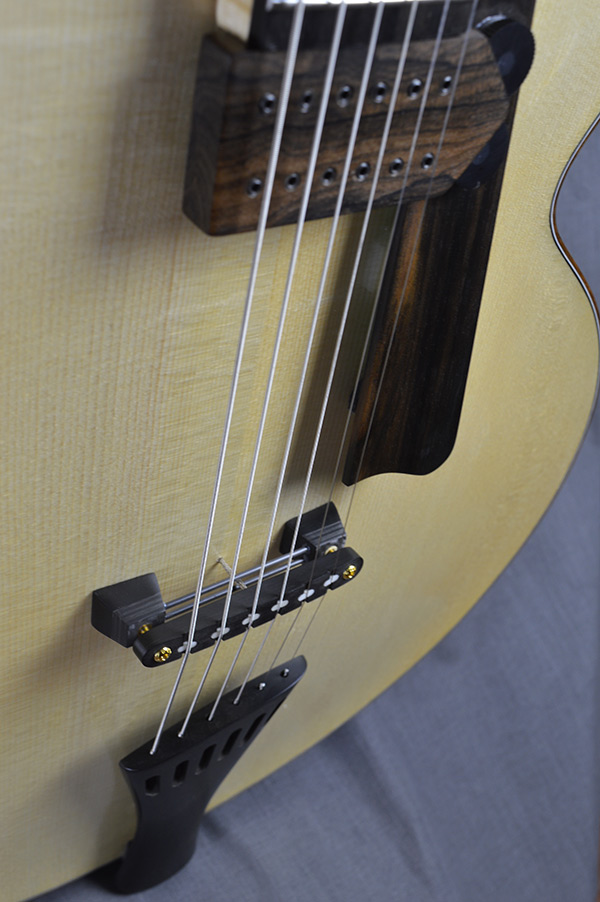 The first Siracusa 16R, that I described here, had a very different saddle, because the nuts where it sat protruded from below it. Now it is 2 mm lower, because those nuts have been moved inside it. Still, it is extremely stiff, with its invisible carbon core that works as a sturdy flat base for the mini piezo crystals inside it.

You’ll see that the bridge of my first 16R had a single foot. The new one has two, also hollow, joined by two carbon rods. Its mass is significantly lower. I did my homework comparing both bridge designs on the same guitar, and the gain in tone was just hard to believe. If you look at the photo, you’ll see that only the lower part of them is ebony; the top is carbon. I always hide the carbon with some wood on it, making the construction much more complex, but I didn’t do that here. For the moment, it will stay like that—it’s the only carbon that you can see in the guitar.

The peghead has changed also: 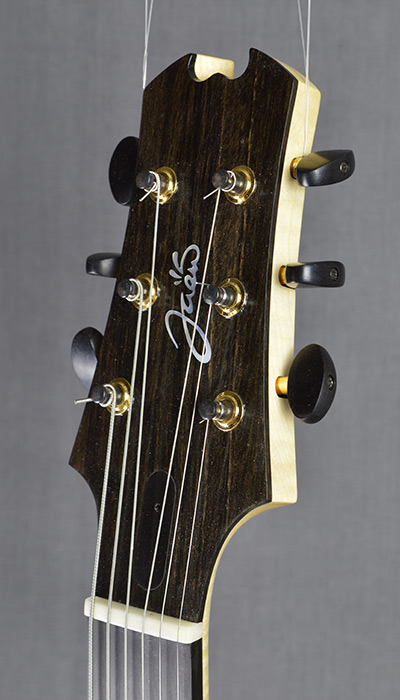 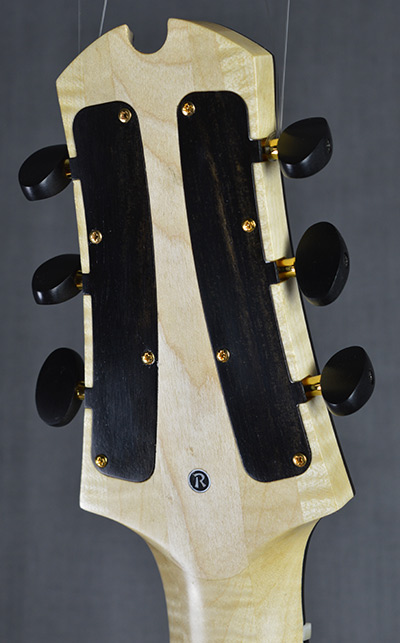 Those are Schertler tuners, modified to have shorter posts so that they fit inside the 16-mm thick peghead. This is no easy task, and I’ve had to design and build several jigs to make the modification easier to perform: 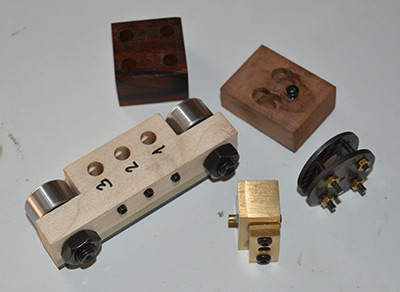 My previous machines (Gotoh Stealth made for ukuleles) didn’t need to be modified, but they have been phased out. In the end I think that the change has been for better: even if the Gotohs were very light, they were very fragile. The Schertlers are heavier, but much tougher.

If you look at the peghead face photo you’ll see that the truss rod nut cover has a small hole. That is for removing it: it is magnetic, but you can pull it by inserting one of the two Allen keys in the tool bag that comes with the guitar. The truss rod itself is different now; it is a two-way unit. Finally, I have changed after so many years using traditional compression rods.

The pickup is still a “crooked” unit (deliberately). It has an asymmetry in its construction, so that the knobs below it are not the same height and the pickguard does not lie parallel to the strings. This photo shows it quite distinctly: 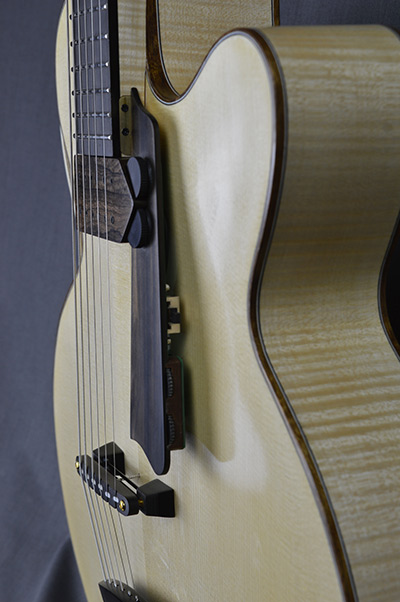 That way the controls below the pickguard can fit there without touching the top.

The integration of the piezo and the magnetic pickups is quite original, and it is made possible because there is a hidden pot below the pickguard that works linked to another through a gear wheel. I have explained this previously, so I won’t go into more details. For the player, this opens a lot of possibilities, as described in the manual for this guitar, pages 13-18.

The preamp and battery are located close to the output jacks: 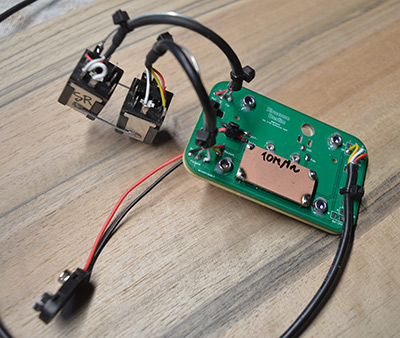 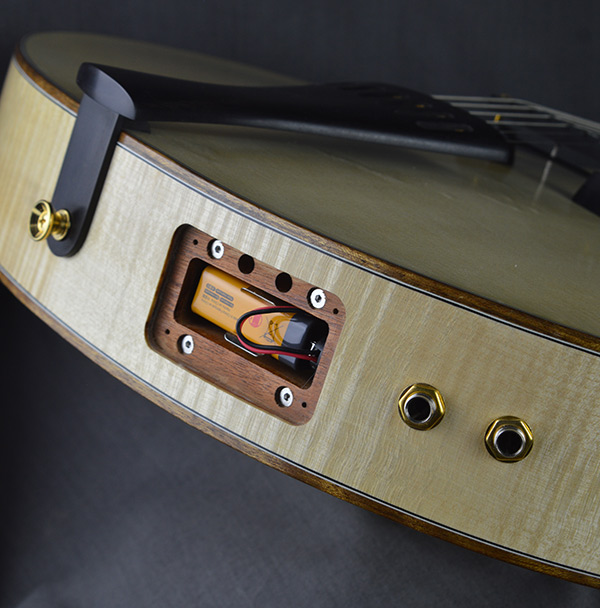 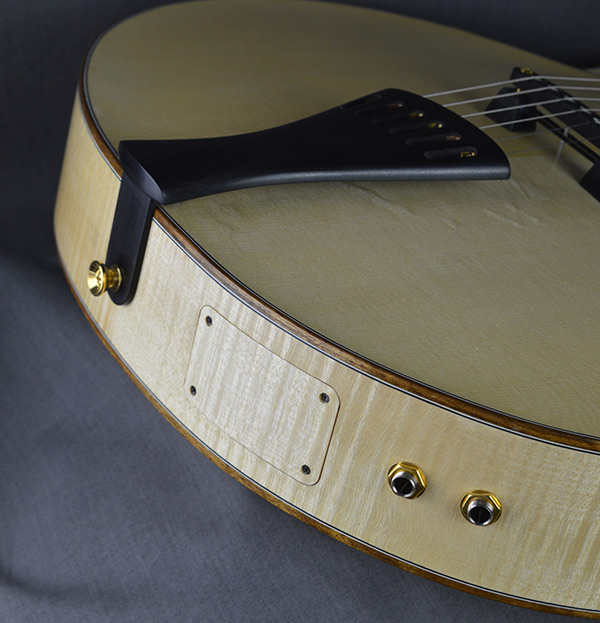 On the other hand, the Siracusa 16E is a two-pickup guitar, the first of this model:

This shares with the R model the two-feet bridge (that has a single rod joining them, as there is not a wire coming down from the piezos). Here you can see it: 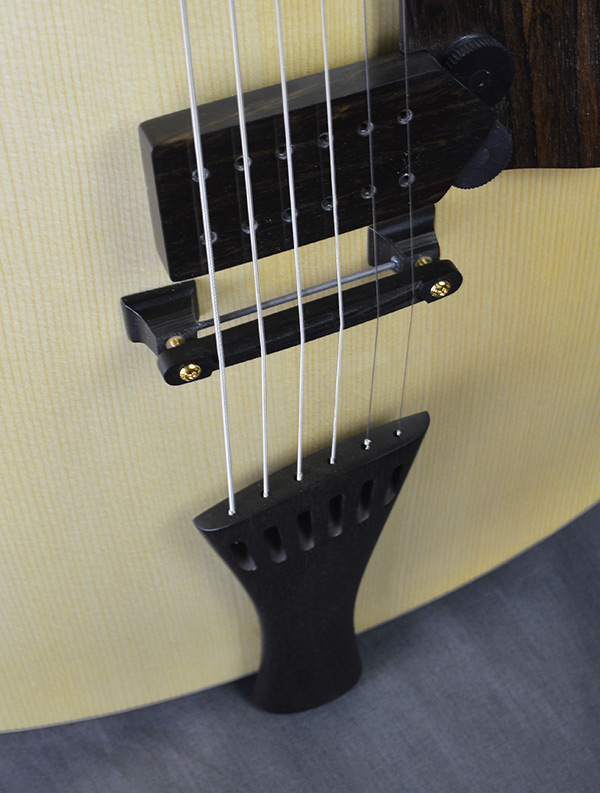 I redesigned the saddle also, so that the two nuts in the posts are embedded into it. It is just a little bit wider than the previous version, but internally it has changed a lot because its carbon core has a different shape.

It has a similar peghead to the one in the R model, but with an “E” inlaid in mother-of-pearl and ebony: 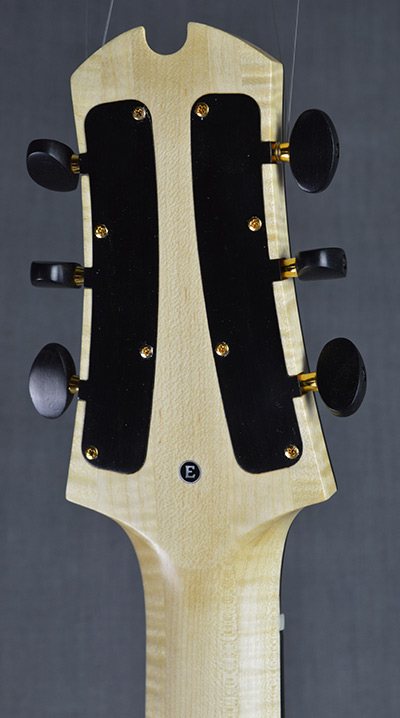 An important difference with my previous two-pickup Siracusas is the possibility of adjusting the height of the pickguard (and, with it, the height of the bridge pickup). This can be done by loosening the screws in the photo: 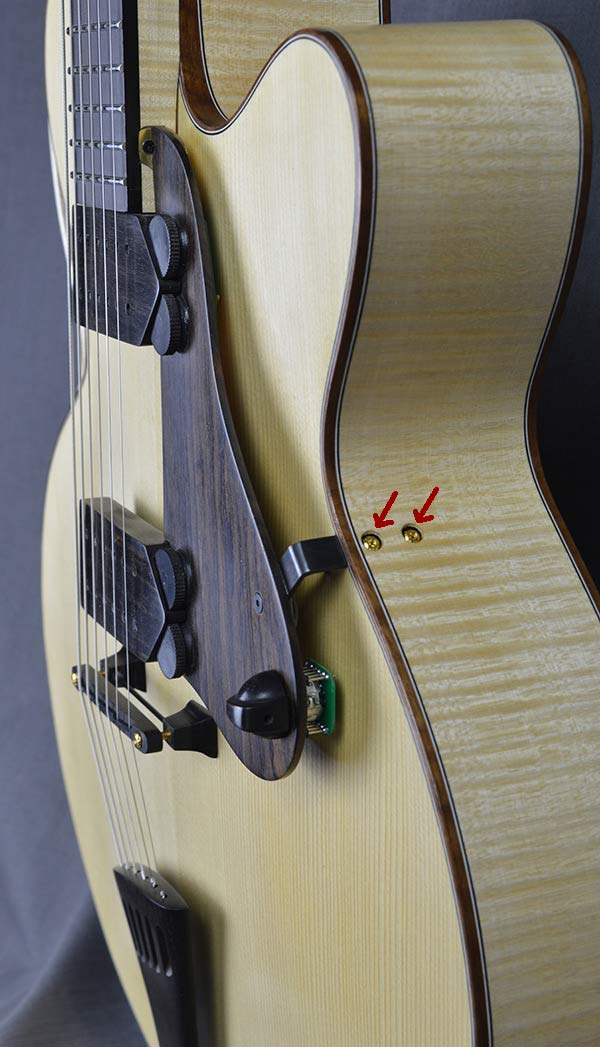 I think this is a great design, and I can’t believe something similar hasn’t been tried before.

If you notice in the photo above you can see the electrical connections for the pickup switch right below the pickguard. Look, more clearly: 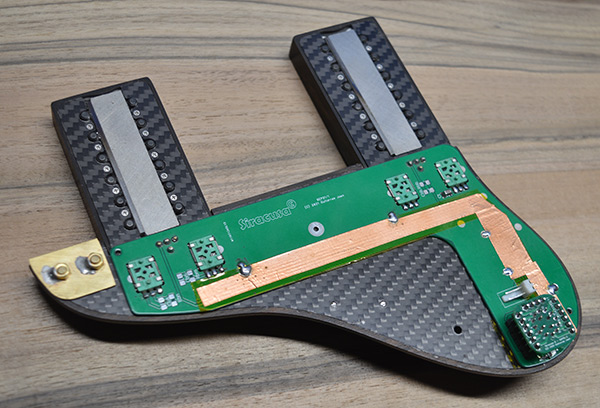 As you can see that is not a common switch, it has many connections! This is because this guitar has a peculiar circuit, but only for the mid position of the pickup switch. In this position, you have a series pickup formed by the outer coils of the neck and bridge pickup. It has its own volume control, independent from the other two, and, in my opinion, it is a much better wiring than the one that’s commonly used. Remember that the common wiring connects both pickups in parallel, with two interacting volume controls and two tone controls in parallel, which makes it totally different from the other two positions. My wiring makes a mid position that is really something between the other two. This is explained in the manual, in pages 13-14, that you can download here.

A complication that arised from that modification was that the switch that I used had a very thin axle. I have been using chicken-head knobs for the pickup switch in all my Siracusas since day one, but I couldn’t find any commercial knob for the E model in that style. So I decided to make wooden chicken-head knobs. Soon I saw that wood construction was a problem if they had to be small and strong. I broke several prototypes when I put them under stress, but I found a way to make them tough using a plastic core. Here you can see one: 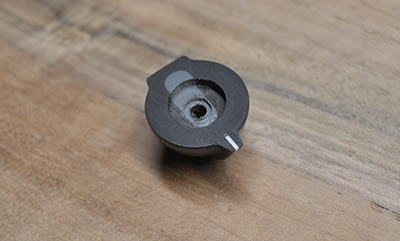 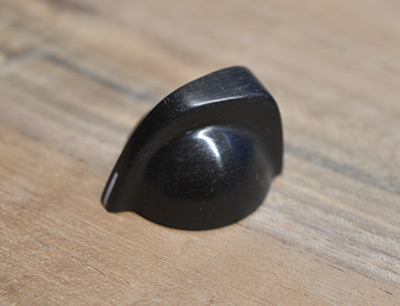 These were not easy to design, and they are not easy to make. I have always put the real innovation above aesthetical aspects, but seeing the effort I put here just for aesthetical reasons has made me aware that my priorities must be quite balanced now.

P.S.- Oh, I almost forgot it. These guitars come with an antifeedback plug, similar to the one shown here.